Ananda Bosman is a visionary public speaker, teacher, cosmologist & musician, as well as a prolific writer of thousands of pages, in numerous books and over a hundred articles.
Appearing in numerous television, movie and radio broadcasts, as well as assisting in several main stream movies. Since 1986 he has given many hundreds of lectures, seminars and workshops worldwide, using state-of-the-art multimedia presentations that rivet the audience. Presenting visionary, scientific, shamanic, spiritual, mythological, & cosmological connections in an exciting, new, and utterly unique way. After a near-death-experience at the age of 15 that completely changed his life, he became a “contactee” for Numinous « Ultraterrestrial » Intelligences (the Emmanuels), and Extra – Temporal Intelligences (ETI)
— having over 120+ witnesses to the UFO-phenomenon with him in various levels of proximity including landings and direct encounters. This is now Ananda‘s 31st year of engagement in Spirit of public presentation and teaching.
In his public service, over that time, he has imparted an extraordinary wide range of information over diverse fields… Ananda Bosman has also pioneered, in 1994, his INTERgeometry computer 3D animations. These were based on his 1989 experience of what he now calls Ultraterrestrial Translation Technology, one of several occasions where he experienced being “re-digitalised”, in front of witnesses in very close proximity…He has made appearances in over 22 countries worldwide,  appearing in different Films, Radio and TV programs, as well as contributing to several motion pictures, like Jan Kounen’s « BLUEBERRY/Renegade: Taste of the Forbidden, » and « 99 Franks », or film maker, Jean Michel Roux’s, « Journey Into The Invisible World ». 30 Years as a contactee. 42 years as an Experiencer. 127 witnesses to the UFOs with him. Having been inside several times, fully conscious, and direct meetings. Yet, a lesser known part of Ananda Bosman’s life, until recently.  Otherwise known as the musician founder of popular electronic 432Hz Music, which Bosman sees as a language interface with the UFO, through coordinated concerts using specific harmonics, that also have been registered in association with the UFO; Ananda Bosman also is known for his ethnopharmacological work related to the pineal gland secretion “pinoline”, having pioneered sensory light isolation experiments with pilots since 1992, based on his neurotransmitter/enzyme theory (originally gleaned from his ultraterrestrial contacts, he maintains).

He will be speaking about the following topics:

Dialogues with the Cosmos: Making the Contact Experience Available for all Awakening (Sentient) Mankind

A Semantics for Interface with Cosmic Intelligene 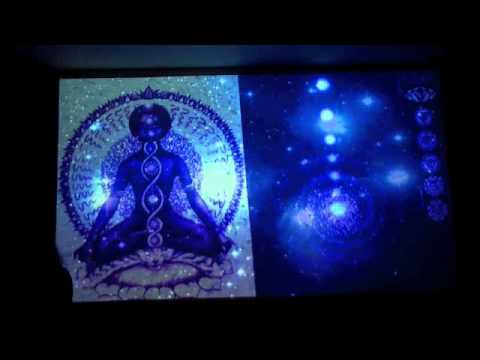 How our Reality is being re-engineered

432 Hertz & 8 cycles per second in the Aumega Music revolution