We will give the opportunity to speak to contactee and experiencer groups and communities and to star children (starseeds) who can establish a connection or reconnection with their hybrid children from their cosmic and galactic families via channelers, and who are preparing to host future hybrids’ coming to Earth… 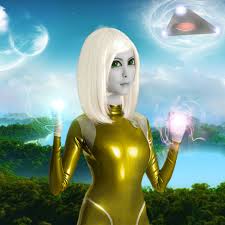 We will also be hosting Human Hybrids who are living among us….

All of them think they are « lightworkers », and contributing to our awakening and our evolution process, they will tell us why and how…. their program, their experiences, their teachings.

We will interview them about how they can explain abductions and the ongoing hybridization program – happening on Earth as well as elsewhere in the Universe – and what stage of our evolution we have reached as mankind on our planet, and for what purpose…

We will offer an overview of their channeled and direct telepathic communication with extraterrestrials regarding the laws of creation and genetics, the soul groups and the oversoul, our various densities and dimensions, the illusion of physical reality and our powers inside the matrix system we live in, various levels of consciousness, the ascension towards the 4th density and the locations based on sacred geometry that those welcoming communities are using, and their program for this « New Earth » which is taking shape.

Live from Oregon, Carlos is a father of hybrid star children, and contributor to the « Galactic Families » Website Group where he helps connecting with galactic families and hybrid children of those who have requested it…

Live from Maui in Hawaii, Shaun is a Channeler, and channels in hybrid children’s messages via 2 entities who are twins named Ishuwa (male) and Shayla (female). He will exceptionally give us one hour of his precious time to answer our questions through a live channeling session!

Live from Sedona in Arizona, a painter and an artist, Bridget is also the founder for the « Hybrid Children Community » and « Harmonious Earth » groups, an alien « voluntary » abductee since childhood, she will let us know about the interaction between hybrid children and some humans, along with some information about her program for these Hybrid hosting communities.

Live from the Jura region in France, Maxime is contributing to expand one of Bridget Nielsen’s upcoming communities in France, he will keep us informed about his experience and his relationship with his hybrid children..

Live from Arizona, Cynthia is best known as the « E.T. Sculptor » in the US, she states that she’s been conceived in a secret OSS lab in order to produce hybrids, therefore she is the result of a Human/Extraterrestrial cross-breeding.  She creates sculptures that « channel » through them special frequencies which are conducive to E.T. contact.  She will talk to us about her very unusual experience!

Live from Arizona, Viviane who is « Francophone », will tell us about her experience as an « Arcturian » Hybrid and her teachings..

Live from Arizona, Juju is a positive Reptilian Hybrid, from the Faqui planet in the Andromeda galaxy, incarnated into the human form, but capable of « shape-shifting ».  Her mission is to make us think over the star beings’ intentions, which even amongst Reptilians are not all selfish and negative.

MANY SURPRISES WILL AWAIT US ALL ALONG THAT EVENTFUL EVENING…

At the L’ETRIER Restaurant, starting at 7PM..